Toads are a humanoid species that make up a large portion of the population of the Mushroom Kingdom. They are easily identified by their small stature and their large colored mushroom-like cap growing from their heads. Toads can be found throughout many areas on Mario's Planet, predominantly on the Mushroom Continent. They are a peaceful race, sometimes viewed as puny or cowardly by species, and although they aren't known for their fighting abilities, some have gone out on their own adventures or assisted Mario on his quests.[2][3]

A well-known Toad is an attendant and servant of Princess Peach Toadstool of the Mushroom Kingdom and is also named Toad.

Toads are a short species, ranging from 1 to 1.4 meters in height. They have two small beady eyes, a mouth, and no apparent visible noses or ears. Their legs are short and generally covered by the large baggy pants commonly worn by them.

On top of their head grows a large (usually white) cap with four circular spots around it and one on the top. The cap is usually colored white while the spots can have different colors, which can change depending on the environment.[4] Toads can grow round "hair" in the form of spheres from the sides of their caps, and actual hair between their caps and their heads. They are also able to grow facial hair. 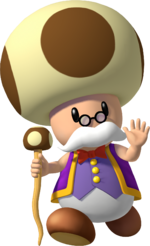 Toadsworth, an example of a Toad with facial hair.

Although the vast majority of Toads generally fit this description, some have been shown to have very divergent traits, such as large noses and ears, or different patterns on their caps.[5][6][7]

The common outfit worn by Toads consists of the baggy white pants previously mentioned, along with a pair of round dark brown shoes and a vest, with no shirt underneath. The vest is usually colored to match the Toad's spots, although Toads with different colored spots also often wear blue vests instead. Female Toads sometimes also wear dresses underneath their vests.

Toads are a very social kind, and can be seen living on many different locations on Mario's Planet alongside other species. Toads inside the Mushroom Kingdom are shown to be extremely loyal to Princess Peach, their ruler. 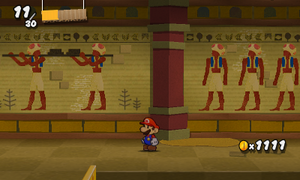 Captain T. Ode is a sea captain that had been frozen by the Kingdom of Shrooms since ancient times and was reawakened during Mario's adventure in Paper Mario: The Origami King.[8]

Another ancient civilization is Shangri-Spa, a hot springs resort built on floating islands high above the Great Sea. The Shangri-Spa Toads also had territory across Great Sea islands, having built the Sea Tower and Diamond Island as well. Their civilization still exists in modern days.

An unknown, presumably old, Toad civilization at some point built the Mushroom Ruins somewhere in the Mushroom Continent. They were also likely responsible for the Grand Labyrinth a 30 stories high labyrinth used to guard the the Super Crown.[9][10]