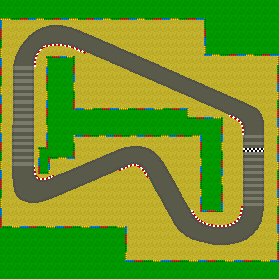 A map of Mario Circuit 1.

“Pulled straight from the SNES version of Super Mario Kart, this narrow track is further complicated by the pipes that protrude from its surface.”
—Instruction Manual, Mario Kart DS[1]

Mario Circuit 1 has a simplistic layout. It is made of a paved road on a dirt field. The course starts with an immediate left turn followed by a long straightaway, which then has a sharp left turn. Several Warp Pipes are scattered here. There is another series of turns that have a handful of Warp Pipes scattered about, and then a lap is finished. In the background, you can see tree-covered hills also visible from Donut Plains 1.

An overview of Mario Circuit 1 from its first appearance.

This course has three other layouts that were used during Mario Kart Tour. 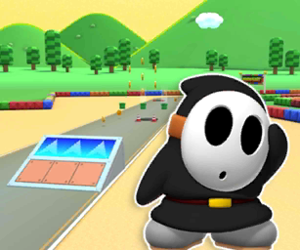 The Reverse variant is mostly identical to the regular version, except driven backwards. In addition, the longest straightaway of the course now has a Glider Ramp and some extra Warp Pipes, and there are several oil slicks on the course[2]. 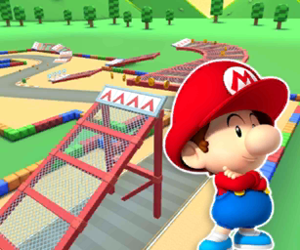 The Trick variant has extra ramps: some small ones near the beginning, a huge platform right after the second turn that the racers drive up, and a set of ramps leading onto each other right before the finish line[3]. 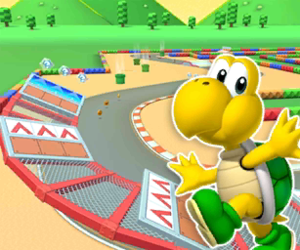 The Reverse/Trick variant is nearly identical to the Reverse variant; however, it has the ramps from the end of the Trick variant facing the other direction. These ramps now have a Glider Ramp on top, and extra Warp Pipes blowing air vertically are scattered around near both Glider Ramps[4]. 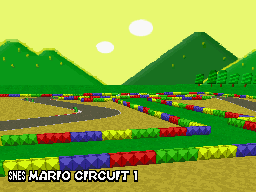 An overview of Mario Circuit 1

During Mario Kart DS, the eighth mission of the first set took place here, where Mario performed power-slides on this course.

During Mario Kart Tour, this course was in a total of fourteen tours[5]: