Princess Rosalina[1] is the adoptive mother of the Lumas and pilot of the Comet Observatory. She watches over and protects the cosmos.[8]

Rosalina was born a princess of the Mushroom Kingdom several centuries ago. She lived in the castle with her parents and younger brother. Her family was quite interested in astronomy, with her father owning a powerful telescope. She also wore star themed clothing as a baby, long before she met the Lumas.

Her mother later died of an unknown cause.

One day, young Rosalina found a crashed Starshroom holding a small baby Luma. After hearing the Luma explain he was looking for his Mama, Rosalina promised to help him. For years she took care of the Luma and waited with him, using her father's telescope to try and find Luma's mother. Eventually they decided to repair the spaceship and travel in search of his mama. For days they traveled along asteroid fields and caught Star Bits until finally landing in a turquoise ice comet. After travelling through space for quite some time, Rosalina decided to settle down on the ice comet and assume the role of Luma's mother. Together they built a large home on the ice comet, which would eventually become the Comet Observatory.

As time went on, more Lumas started appearing, each of which was taken in and named by Rosalina. After seeing their 100th comet, Rosalina began to think about her home planet. Using her father’s telescope, she gazed back at the Kingdom where she grew up. With memories of her life there flooding back, she broke down into tears, longing to return home to her family, though knowing that her mother wasn’t there.

For some time after that Rosalina was content, though one day she became sad once again. Luma, tried to cheer her up, but Rosalina’s crying continued. It was then that Luma had an idea. He transformed their home into a comet, allowing Rosalina to travel back to her home planet. Rosalina no longer cried from that day on.

After visiting her home planet, Rosalina decided that the Lumas were now her family and she that she would raise them until they were ready to leave or transform. At this time, the reborn Young Master Luma was welcomed into the Observatory with a party. When in bed that night, Rosalina decided that she would return to her home planet once every one hundred years from then on. As the years went on, the Rosalina’s new family grew and grew, gaining more members than can be counted.[9]

For multiple centuries, Rosalina travelled the universe aboard the Comet Observatory, fulfilling her duties of taking care of Lumas.[10] Every hundred years, she would return to her home planet and fly over the Mushroom Kingdom, causing multiple Star Bits and Power Stars to rain down. This event came to be known as the Star Festival.

At an unknown point, she met Lubba, a purple Luma that would eventually become a leader of his own Luma crew.[11] 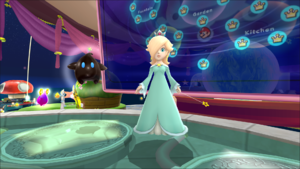 Rosalina and Polari at the Comet Observatory

During a particular Star Festival, Rosalina became a target of Bowser's plans. As the Comet Observatory flew over the Mushroom Kingdom, he used a mysterious force to pull away Star Bits and Power Stars from the starship, sending it into a deep hibernation state and stranded over the planet.[12] Shortly after, Rosalina appeared as a projection to Mario on Gateway Galaxy, assisting him in escaping it by entrusting Luma in his care. This granted him the power to travel through space and the ability to perform a Star Spin, before sending him off to retrieve a Grand Star.[13] After Mario arrived at the Comet Observatory with the rescued Grand Star, Rosalina offered to help Mario rescue Princess Peach from Bowser if he found more Power Stars to return the Observatory into a powered state.

After Mario returned 113 Power Stars and 6 Grand Stars, the Comet Observatory was once again fully powered, and Rosalina piloted it to the Center of the Universe, Where Mario fought Bowser for the final Grand Star. However, upon removing the Grand Star from Bowser's Galaxy Reactor, it accidentally lead to the creation of a giant black hole, that grew to consume the entire universe. In order to reverse this, the Lumas from the Comet Observatory joined forces to create a Universe Reset, restoring everything to shortly before the Star Festival began, while slightly altering the course of events, such as Bowser's plan.[14] While everyone else's memories of the events were effectively erased, Rosalina and Mario kept theirs. Rosalina then returned to her starship and flew away, promising to watch over them from beyond the stars.[15]

During Super Mario Galaxy 2, Rosalina was once again caught up in Bowser's schemes shortly after flying over the planet during the Star Festival. Like his first plan on the previous universe cycle, Bowser attacked the Comet Observatory and stole its Power Stars.[16] This caused multiple Lumas to fall down to the Mushroom Kingdom, including the Young Master Luma. The Comet Observatory was then trapped near Bowser's Galaxy Generator, where Rosalina waited, knowing she'd be reunited with Young Master Luma.

Rosalina participated in the Mario Kart Wii tournament, alongside a Yellow Luma that floated besides her kart. Her signature color is light-blue, her emblem is a Grand Star and she is a heavy-weight driver. WHen driving karts, she wore her regular dress, but when driving bikes, she wore a white motorcycle outfit with light-blue stripes and light blue boots.

Rosalina also participated in the Mario Kart 7 tournament, this time without her partner Luma. She maintained her signature color, emblem and weight-class from the previous tournament, and also introduced her own track, Rosalina's Ice World.

Rosalina first joined Mario, Luigi, Peach and Toad on their travels in the Sprixie Kingdom after the group had defeated Bowser during the events of Super Mario 3D World. She joined the team after they travelled to World Star and completed Super Galaxy.[17]

Rosalina's first tennis tournament was in Mario Tennis: Ultra Smash, where she wore a sleeveless light-blue outfit with a skirt, light-blue shoes and white thighs. Her emblem was a Grand Star. On the court, she would float to move around, and levitate the tennis ball instead of holding it. She was classified as a Power-type.[18]

Rosalina was present during the events of Mario Party: Island Tour. Although she did not participate herself, she was present at the end of the Rocket Road board to congratulate the winner of the race.[19]

During Mario Golf: World Tour Rosalina participated as one of the strongest contenders in the tournament, losing only to Bowser. Notably, she did not hold her club, opting to control it with her wand instead. She was also accompanied by a few Lumas.

Rosalina took part in Mario Party 10, having her own Amiibo Board dedicated to her.[20] 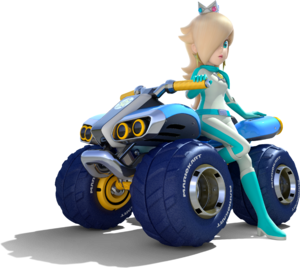 Rosalina and her Standard ATV

In Mario Kart 8, Rosalina participated wearing her regular outfit in karts, and her biker outfit in bikes or ATVs. She is classified as a heavyweight character (weight 7).

Rosalina raced once again during Mario Kart Tour. Alongside her regular dress, she also sported a number of different costumes, those being her Halloween outfit (a witch costume), Aurora outfit (a fancy dress based on the northern lights) and her Swimwear outfit (a light blue beach dress with Grand Star patterns). Additionally, she used a Fire Flower to race using her Fire form. Her own track, Rosalina's Ice World, returned as well.[21]

Rosalina once again took part in a golf tournament during Mario Golf: Super Rush. This time, she was wearing a new outfit, and was classified as an All-Around type. She used her magic to assist her during the games by levitating herself, her equipment and swinging her golf club. Her Special Shot is the Shooting Star, and she assisted by Lumas in a dashing move called Luma Dash during Speed Golf.[22]

Rosalina is a very motherly figure.

At some point in the past, Rosalina met Lubba.[23] While the nature of their relationship is unclear, it's perhaps implied that he was under her care when he looked like a regular Luma.[24] They seem to be on friendly terms, as both have visited each other on recent times.[3][25]

Rosalina is a tall woman with light skin and very light strawberry-blonde hair. Despite being hundreds of years old, she still has the appearance of a young woman. Usually she wears a long strapless light-blue dress with long sleeves. The dress parts at the bottom and is decorated by a silver star emblem with a yellow gem at the chest. Rosalina also wears a silver crown with red and blue gems and a pair of earrings in the shape of four-pointed stars. She often wields a magic wand with a star-shaped ornament at the tip.

When she was younger, Rosalina possessed darker strawberry-blonde hair and wore a simple white dress.[26]

Rosalina is highly skilled in magic, being able to float, levitate objects and generate force fields.