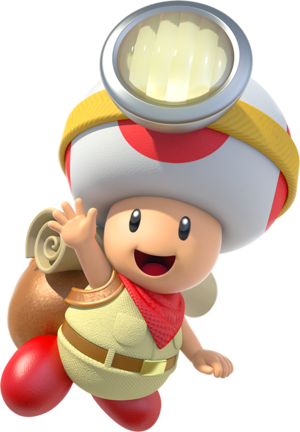 The adventurous leader of the Toad Brigade, donning his iconic headlamp and trusty yet oversized backpack.

Captain Toad is a red Toad leader of the Toad Brigade. He wears a tan-colored explorer's outfit, red bandanna and shoes, and a large headlamp, and carries around a heavy backback.

Following the Star Festival, Captain Toad, along with four other Toads and Luigi managed to escape Peach's Castle after Bowser lifted it into space, although they were later separated from Luigi. This led to the creation of the Toad Brigade, made up of Hint Toad, Bank Toad, Mail Toad, Yellow Toad and its self-appointed leader, Captain Toad. Eventually, the Brigade made their way to Honeyhive Galaxy, where they met Mario and decided to help him in his quest to locate Power Stars, giving him one they found earlier.[1] Afterwards, they set out to adventure through various Galaxies and find Power Stars, using the Starshroom, a starship built for them by Lumas at the Comet Observatory.[2]

Due to the destruction of Bowser's Galaxy Reactor at the Center of the Universe, Captain Toad, along with the rest of the Brigade, was subsequently consumed by the black hole that destroyed the Universe. The Universe Reset created by the Lumas to fix everything recreated the Universe up to shortly before the beginning of the Star Festival. and Captain Toad, with no memories of the previous adventure, would find himself back in the Mushroom Kingdom.

Since the events of Super Mario Galaxy were effectively erased from history, Captain Toad would once again form the Toad Brigade, although this time they would depart from the Mushroom Kingdom, in a Starshroom built by a Luma from Lubba's crew. He later met Mario in Spin-Dig Galaxy and joined him in travelling alongside the Starship Mario. Together, the Toad Brigade assisted in finding numerous Power Stars.[3] The Toad Brigade was later seen adventuring in Fluffy Bluff Galaxy, among other Galaxies.[4]

Captain Toad, along with Toadette, who at this point had joined the Brigade, were on an expedition on Mushroom Ruins when Toadette was suddenly kidnapped by Wingo, who stole from them a Power Star they had found.This set Captain Toad on an unexpected rescue mission, finding coins, Super Gems and Power Stars along the way. After following Wingo all the way to Wingo's Watchtower, Captain Toad defeated the large bird and rescued Toadette, they then took a minecart ride back home.[5]

After their first encounter with Wingo, Captain Toad and Toadette were once again ambushed by him in Mushroom Ruins as he stole another Power Star from them, this time taking Captain Toad with him. Captain Toad was taken by Wingo to the top of Battle Tower, where he was briefly rescued by Toadette before being blown away by Wingo.[5]

Captain Toad then landed in Darkly Cove. After climbing out, he was once again ambushed by Wingo, who carried Toadette in his beak. Captain Toad then set out to rescue her, not knowing she had been dropped by Wingo over Stumpy Springs Sanctuary. The pair would later reunite after Captain Toad rescued Toadette in Wingo's Watchtower and defeating Wingo for good. They then took another Minecart ride back to Peach's Castle, where upon arrival, Captain Toad noticed a Green Star falling from the sky. He hastly followed it to the Clear Pipe that had just been used by Mario, Luigi, Princess Peach and Toad. Leaving Toadette behind, Captain Toad jumped down the pipe and ended up in the Sprixie Kingdom. He was eventually followed by the rest of the Toad Brigade, with the exception of Mail Toad and Toadette.[6]

After arriving in the Sprixie Kingdom, Captain Toad and the remaining members of the Toad Brigade set out to collect Green Stars and aid Mario and his friends. During the events of Super Mario 3D World, Captain Toad ventured, in order, through Super Bell Hill, a grassy mountain in World 1, Conkdor Canyon, Shadow-Play Alley, a half submerged structure in World 3, a haunted house in World 5, Clear Pipe Cruise, a fortress surrounded by lava in World Castle, a floating cube in World Star and finally a floating lava structure in World Crown. He met Mario and gave him a Green Star on his first, third, fourth and seventh adventures, respectively.

Once again paired with Toadette and aided by the rest of the Toad Brigade, Captain Toad set out in search of the "Legendary Crown", travelling to various places in the Mushroom Kingdom and finding many Shiny Crowns in the process. Their search eventually lead them once more to Wingo's Watchtower, where the pair proceeded to beat Wingo for the third time. Finally, their search ended at the Grand Labyrinth, where after exploring thirty levels of the labyrinth they discovered the Super Crown. Captain Toad and Toadette then proceed to head back to the Mushroom Kingdom with it.

During the events of Bowser's Fury, the Toad Brigade (sans Mail Toad) arrived at Lake Lapcat and spread out to search for Cat Shines. Captain Toad went on to find a Cat Shine on Scamper Shores, and then proceeded to be chased by Biddybuds. Upon being saved by Mario, he rewarded him by giving him said Cat Shine. Afterwards, Captain Toad reunited with the other members of the Brigade on Fur Step Island.[7]

After Bowser once again kidnapped Princess Peach, Captain Toad and the Toad Brigade set out to adventure around the world, looking for Power Moons. He first meets Mario in the Cascade Kingdom, and gives him Power Moons he found whenever they would meet. [8]

Captain Toad took part in the Mario Kart Tour Grand Prix. It is possible he was seeking to find treasure during the races.[9]