Bank Toad is a green Toad and one of the members of the Toad Brigade. Like other members, he wears a tan colored explorer's outfit, brown shoes and a brown backpack.

Bank Toad was one of the Toads who, along with Luigi, escaped Peach's Castle after its capture by Bowser. He later became a part of the newly made Toad Brigade, alongside Mail Toad, Hint Toad, Yellow Toad and its leader Captain Toad. Eventually, the Brigade made their way to Honeyhive Galaxy, where they met Mario and decided to help him in his quest to locate Power Stars, giving him one they found earlier.[1] Afterwards, they set out to adventure through various Galaxies and find Power Stars, using the Starshroom, a starship built for them by Lumas at the Comet Observatory.[2]

Due to the destruction of Bowser's Galaxy Reactor at the Center of the Universe, Bank Toad, along with the rest of the Brigade, was subsequently consumed by the black hole that destroyed the Universe. The Universe Reset caused by the Lumas to fix everything recreated the Universe up to shortly before the beginning of the Star Festival. Bank Toad, with no memories of the previous adventure, found himself back in the Mushroom Kingdom.

Since the events of Super Mario Galaxy were effectively erased from history, Bank Toad would once again join the Toad Brigade created by Captain Toad, although this time they would depart from the Mushroom Kingdom, in a Starshroom built by a Luma from Lubba's crew. He later met Mario in Spin-Dig Galaxy and joined him in travelling alongside the Starship Mario. Together, the Toad Brigade assisted in finding numerous Power Stars.[3] Bank Toad helped Mario by storing his Starbits in Starship Mario.

During Captain Toad: Treasure Tracker, Bank Toad, alongside Hint Toad and Yellow Toad, adventured with Captain Toad and Toadette, occasionally giving items such as Super Mushrooms or Super Gems to them.

Bank Toad, along with Yellow Toad and Hint Toad, soon followed Captain Toad to the Sprixie Kingdom, where they assisted the captain in finding Green Stars.[4]

Following Captain Toad and Toadette, Bank Toad assisted in the search for the "Legendary Crown", helping out along the way.

During the events of Bowser's Fury, the Toad Brigade (sans Mail Toad) arrived at Lake Lapcat and spread out to search for Cat Shines. Bank Toad went on to find a Cat Shine, before becoming stranded on a small island surrounded by Black Paint near Crisp Climb Castle. Upon being saved by Mario, he rewarded him by giving him said Cat Shine. Afterwards, Hint Toad reunited with the other members of the Brigade on Fur Step Island.[5] 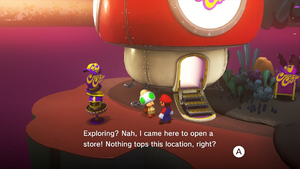 Bank Toad in the Lost Kingdom

After Bowser once again kidnapped Princess Peach, The Toad Brigade set out to adventure around the world, looking for Power Moons. Bank Toad ran a Crazy Cap store from a Starshroom at the Rocky Mountain Summit, in the Forgotten Isles.